Roxana moved from Bucharest to Munich. She tells us two short stories of her first experiences as an expat in Munich and the difficulties and differences she had to face in the first months. 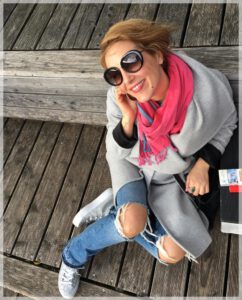 I was at the end of my first half of a year of living in Munich. I had bought myself a Smart, the perfect car for this city. So, one night, I went to a movie and watched a film that starred Tom Cruise. Then, I was on my way home, with loud music blazing from the car’s stereo and the ceiling left open for fresh air. It was the stars and moon above me! Just before I turned into my street, I saw the police in the mirror.

And suddenly, more lights appeared on the top of their cars and some words started to flow in red lights. From all that multitude of words, I understood just one: STOP!

So, I stopped. Two officers came to me and started talking in a language alien to me. My mind could just register a few words: ‘Auf Wiedersehen’, ‘Guten Morgen’, and ‘Ich spreche kein Deutsch’.

Not good and not enough, especially in an encounter with the police. I opened the door of my car. I still had a cigarette dangling between my lips. At that moment, their voices started to yell. So, we do this, ha? You pull your weapons, and I raise my hands. I saw that in the movie.

My hands went up. They were still yelling. With one hand up, I put the other one to my ear and said: I DON’T SPEAK YOUR LANGUAGE. One of them came closer, still blabbering and with one hand on the gun. I mumbled to myself – ‘Well done, Roxana!’

And then, I started screaming in my perfect English:

“I don’t speak German. Do you speak English?”

He did. They both did. And it was just a routine check-up. They were young guys, and funny too.

“We told you to stay in the car and kill the engine.”

“What are you doing?”

“Where are you coming from?”

“Have you been drinking?”

“Nooo!” (I had an Aperol Spritz before the movie)

“Take your tongue in and let the air out.”

The third time was the charm. I didn’t see what the thing said, but I saw their smiles:

“You had been drinking a bit.”

“Since when are you in Germany?”

“You two too. Auf Wiedersehen!”

So, this was the first lesson I learned: When the police in Germany stop you, keep calm, kill the engine, stay in the car, and ask them to talk in English.

The second lesson that I learned: Germany is well developed in a lot of fields, but getting an internet connection can turn out to be an interesting trip.

What you should know about German internet

I am an addict. I am addicted to the internet. I can’t deal with my life without the internet. It started back when I was a journalist, when the internet was taking me places that I had never dreamt of. Fast and beautiful and full of information!

I haven’t owned a TV for almost 20 years now. And I am very proud of it. The bigger bugger is the fact that this “no TV life” is feeding my internet addiction. Back in Bucharest, this was never a problem. You could never finish the internet, be it the Wi-Fi at home, coffee shops, restaurants, boutiques, or even your mobile data. No, sir! It was never-ending. And the price? Well, for what you pay here for 3GB, you get the never-ending story in Romania for the same amount.

After moving here, to a country where civilisation has greater and bigger standards, imagine my surprise! And how easily I have become a financial slave to the communication companies. The internet is not only expensive here, but hard to find and hard to keep as well. It’s like running on an open field after rabbits. You see them, you have the feeling you can catch them, but that never happens. I am not ordering Beluga Caviar; I just want the internet. I felt robbed!

But the internet is not just expensive. The connection is another problem. Even if you have good connections, you may still have “wall problems.” For example: in front of the door of my building, my mobile data was running perfectly. But the second I crossed the door, it was gone. Like a ghost. Those 5 centimetres made a big difference. Or if you go into a tunnel, don’t expect Google Maps to give any more details on where to go because the juice is out. And if you live here, you know how fast you can take a bad turn in a tunnel and end up nowhere, well somewhere for sure, but not on the right track.

I have tested and talked to other people about this. For the locals, it is normal, because this is how it has always been. But for us, the outsiders, it’s mud on the dance floor. My advice to you? Well, don’t get frustrated. We are all in the same mud hole! Stop eating caviar and truffles!

It’s been quite a while since I moved to Germany, and I wish there would have been something like Project Expat before. But thanks to Project Expat, there is a community I can tell my story to and give advice. And there are certainly a lot of good English-speaking partners to help me and all of you out there to make living for expats in Germany much easier.

Richard from UK tells his story about how he made his way in Germany and how German bureaucracy and confusing rules took him into a police cell for one night....