Here’s a guide to the top 8 German superstitions! No matter where you come from, we are sure you are familiar with some strange superstitions. As irrational as they might be, we all have an overly superstitious friend – sometimes, we are even that friend!

Every country has its own odd beliefs and Germany is not an exception to the rule. Whether you consider yourself to be a superstitious person or not, if you recently moved to Germany and want to avoid some awkward situations, it might be useful to get to know some of the most common beliefs across the country.

Every time the 13th day of the month happens to fall on a Friday, it is traditionally considered to bring bad luck in many countries around the world, especially in Western cultures. In Germany, this day is also thought to be an unlucky day. For instance, some Germans prefer not to take a plane on Friday 13th just in case something bad happens.

We all know that knocking on wood three times is an international sign of superstition. In Germany, it is common to touch a piece of wood right after you mention something that you might find scary or that you don’t want to happen. As a curious fact, the material Italians touch is iron.

If you go out for drinks with your German friends and they suggest making a toast, be careful about where you are looking at. While raising their glasses and saying Prost, they will always make eye contact. Not looking into the eyes of your friends is not only considered to be rude, but it can also bring you seven years of bad luck in your sex life, so make sure you remember this rule!

Coming from abroad, the meaning behind this one might surprise you most out of all German superstitions. The phrase “toi, toi, toi” traces its origins back to the old tradition of spitting over your shoulder three times in order to keep the devil or other bad spirits away.

Of course, spitting on someone is not the nicest thing to do! That’s why Germans thought that imitating this sound would be a kinder way to wish someone good luck – dankeschön for the consideration, I guess! 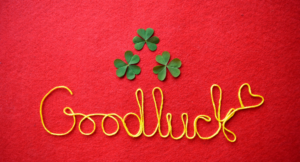 Even though in other parts of the world we might think it is nice to wish our friends a happy birthday in advance if we throw a surprise birthday party for them, this is something most Germans will freak about. However, there is a reasonable explanation to this belief.

In German, there are two ways to send well-wishes for someone’s birthday: Zum Geburtstag viel Glück and Alles Gute zum Geburtstag, meaning “good luck on your birthday” and “all the best for your birthday”, respectively.

Therefore, they think that this good luck should only come on their day of birth; receiving it before will only have the opposite effect and bring them bad luck!

When looking for a gift for your loved ones, make sure you never make the mistake of buying the two cursed gifts in Germany: knives and shoes.

If your friend recently moved to a new apartment, you could come up with the idea of getting him or her a present for their home. Keep this in mind: never a knife! According to old German beliefs, knives are likely to cut the ties of a relationship or cause serious injuries when gifted.

On the other hand, you should know that the best housewarming presents in Germany are bread (Brot) and salt (Salz), since the belief is that bread provides your household with enough food and salt represents wealth and prosperity. Last but not least, cross shoes off your gifts list unless you want your partner to run away in them – it would be your own fault!

Walking under a ladder supposedly brings bad luck worldwide, including Germany, but have you ever wondered why? This superstition goes back to ancient Egypt times. When a ladder leans against a wall, it forms a triangle shape, which Egyptians considered to be sacred. In their culture, triangles symbolised the trinity of gods and passing through them would mean dishonouring the deities. 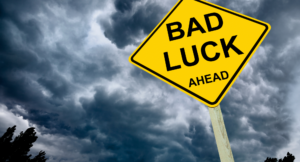 Breaking a plate as a child would make your parents upset for the rest of the week. However, there is a special occasion in Germany in which you can make someone very happy with it. Yes, as weird as it may sound, breaking a plate or any kind of old ceramic pottery the evening before a wedding is another one of those old German superstitions and a tradition known as Polterabend.

It is believed to bring good luck (especially if the bride and groom-to-be work together to pick up the broken dishes) since the thunderous sound of ceramic breaking is thought to ward off the evil. So, if you want your marriage to last, get ready to invest some money on new crockery! 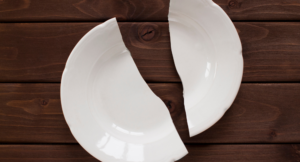 Regardless of whether you believe in these 8 German superstitions or not, we hope that this article helped you understand some local beliefs better and bring you the best of lucks. After all, we all prefer not to risk it for the biscuit! Check out more on German Stereotypes and see if you an relate!

Just like in every other country, there are also rules you should be aware of in German etiquette. In private, you can certainly neglect them now and then, but in...

For me as a German it is not easy to write about Dating in Germany. There are so many stereotypes about Germans which are partly right but also wrong. An Australian...